This type of governor is used for driving a gramophone. As compared to the centrifugal governors, the sleeve movement is very small. It controls the speed by dissipating the excess kinetic energy. It is very simple in construction and can be used for a small machine.

Depending on the construction these governors are of two types :
(a) Gravity controlled centrifugal governors, and
(b) Spring controlled centrifugal governors.
Gravity Controlled Centrifugal Governors
Spring Controlled Centrifugal Governors
In these governors, a helical spring or several springs are utilized to control the movement of sleeve or balls. These governors are comparatively smaller in size.
Watt’s Governor:
Watt governor is the simplest and gravity controlled form of the centrifugal governors. It consists of two fly balls attached to the sleeve of negligible mass. The upper sides of arms are pivoted so that its balls can move upward and downward as they revolve with a vertical spindle. The engine drives the spindle through bevel gears. The lower arms are connected to the sleeves. The sleeve is keyed to the spindle in such a way that it revolves with the spindle. At the same time, it can slide up and down according to the spindle speed. Two stoppers are provided at the bottom and top of the spindle to limit the movement sleeve. 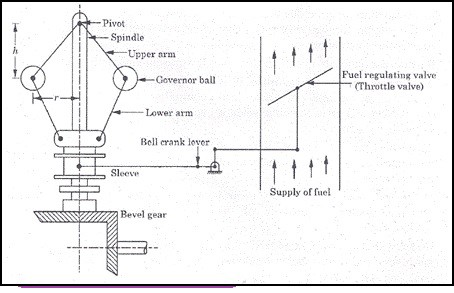 Watts GovernorWhen the load on the engine decreases, the speed of the engine and then the angular velocity of the governor spindle increase. The centrifugal force on the ball increase; that tends balls move outward and sleeve move upward. The upward movement of the sleeve actuates a mechanism that operates the throttle valve at the end of ―bell crank lever to decrease the fuel supply. The power output is reduced.

When the speed of the engine decreases as the load on the engine increase, the centrifugal force decreases. The result is that the inward movement fly-balls and downward movement of the sleeve. The movement causes a wide opening of the throttle valve. The increase in the fuel supply also increases engine speed.

The effort of a governor is the force it can exert at the sleeve on the mechanism, which controls the supply of fuel to the engine. The mean force exerted during the given change of speed is termed as effort. Generally efforts are defined for 1% change of speed.

The power of a governor is defined as the work done at the sleeve for a given percentage change of speed.

What is Centrifugal Governor |Construction and Working

DESIGN AND FABRICATION OF WATT AND PORTER GOVERNOR

Method Of Supercharging for SI and CI Engine -Performance , Need

What is Governing – Methods of Governing Of IC Engine