Other types of Fins are :

The rate of heat transfer from a surface at a temperature Ts to the surrounding medium at T infinity is given by Newton’s law of cooling as, 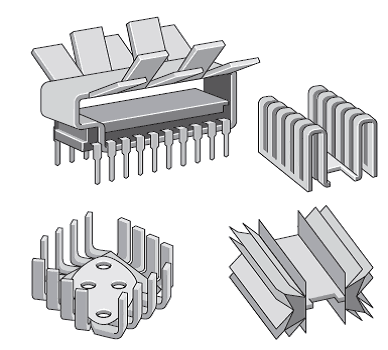 Fin efficiency is the ratio of heat transfer from the actual fin to the heat transfer of an imaginary fin of the same geometry and same conditions but with an infinite conductivity (In other words, if the entire fin surface was in a temperature equal to that of the fin base).

This ratio will always be smaller than one

Fin effectiveness is the ratio of heat transfer from the fin to the heat transfer if the fin wasn’t existing. In other words, this quantity tells us how much extra heat is being transferred by the fin.

The desire is to have this ration as large as possible while keeping the additional cost of adding the fins as low as possible.

Fins are not provided on the inner surface of the cylinder :

We know that the length of the fins is directly proportional to the heat-transferring rate. But the larger length is may be cause of bending in the fins and also increases the weight of the engine. Therefore the overall efficiency will go to decrease.